Damnit!  After I had sworn that I wasn’t going to be tricked into clicking on anymore of those clickbait items, I saw the following and clicked away anyway. 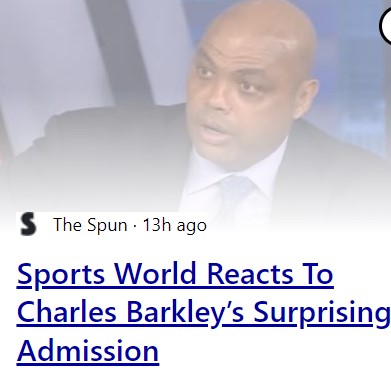 I did so because I like Charles and enjoy listening to what he has to say.  Plus, I knew full well about some of his past gambling problems such as these stories  (click here) and here.

Also, his classic “I am not a role model” statement from some years ago was recently back in the sports news following LeBron’s grabbing-his-balls-incident.  (Ironically enough, for many years, LeBron has been praised for being such a good role model  (click here.)   However, he seems to have come around to Charles’ stance on the matter and no longer cares if he is or is not viewed as a role model.  His grabbing-his-balls move would seem to confirm his new approach to being a role model (click here for story on that incident.))
But back to Sir Charles, I clicked on the link fully expecting to see something about him either admitting he has a gambling problem and how he is handling that, or maybe he had commented on the LeBron matter.
But noooooo, I soon realized that the clickbait bubbas had sucked me in.  Here is what I landed on:
His daughter Christiana was named after a shopping mall that Charles saw when driving thru Delaware.  It left me a renewed resolve that when it comes to future clickbait items like this, I won’t get fooled again.  However, I have said that before.
You know the Who’s version of this but check out Eddie and Sammy’s take on it:

Somewhat related to this is a Netflix movie Love Hard about a catfish dating bait and switch deal. Little Hallmarkey but not a complete waste of time if you want something light to watch. And yes, Die Hard figures into the title.